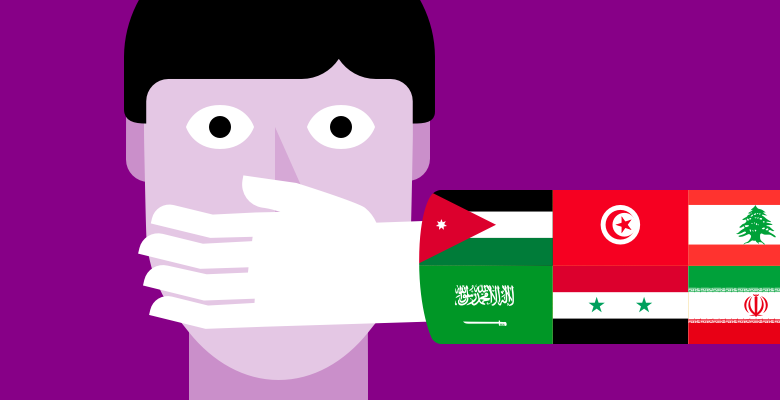 An Overview of Internet Censorship in the Middle East

When it comes to censorship in the Middle East, many countries differ in their policies. As a whole, the Middle East is comprised of roughly 22 countries, but this number is subjective (many define the Middle East by geographic standards, and others define it by religious/cultural standards). Spanning from Asia to North Africa with a population of over 300 million, the Middle East is constantly growing. However, it is safe to say that the region has become increasingly censored since the turn of the century. In May 1999, every country in the region, minus Libya and Iraq, had some form of international connectivity. In that same year, most Middle Eastern countries tolerated freer expression online that was permitted by local news media, such as community print newspapers.

We’ve taken a detailed look at a few countries to examine how censorship varies in the region.

Egyptians have long fought with their government for less oppressive censorship. Within the past few years, Egypt has witnessed many types of media censorship, from Internet to television. During the Arab Spring, the people of Egypt, Libya, and Syria witnessed full Internet shutdowns as their respective governments tried to end protests. As of 2015, the government in Egypt was busy formulating a new cybercrime law to restrict freedom of expression. As bloggers and journalists were being detained, it became clear that Egypt feared push-back from its citizens via the Internet, particularly social media. In 2015, Internet restriction by the government still seemed to be a critical issue, with censorship coming directly from a state-aligned media establishment. And it’s not just limited to the Internet; last month it was reported that Cairo’s Townhouse Gallery reopened after it was raided, without warrant, and closed down by authorities in December. The non-profit art institution can barely still function after being slapped with a list of harsh regulations akin to censorship.

In the African country of Tunisia, censorship of web content has actually decreased since the ousting of President Zine El Abidine Ben Ali (who served from 1987 to 2011). The government that replaced him removed filters on popular social media sites, such as YouTube. Since his removal, there has been a great push towards increased transparency and less regulation. However, Tunisia’s fragile Internet freedom remains threatened by a number of previously-enacted laws, such as the Telecommunications Decree and the Internet Decree of 1997. These restrictive and oppressive laws on censorship have left lasting scars with the African country, and only time will tell if the country can truly embrace lasting Internet freedom.

As recently as January 2016, Israel was pushing for a world coalition to force social media sites such as Facebook, YouTube, and Twitter to block incitement and take more responsibility for the content they publish. While the intention may be seen as justified by the idea that terrorists’ posts should be eliminated, attorneys speaking to The Times of Israel were not convinced this option was feasible. “The point of social media platforms is to provide a forum for users to express themselves,” said an attorney. “We wouldn’t want them to micromanage every bit of data that we post, and we probably don’t want the admins at Facebook and Twitter reading or looking at all the images we post, either.”

A quick rundown of censorship in the Middle East

We encourage our users to stay informed on the important topic of censorship. Freedom House published their 2015 Freedom of the Net report to easily distinguish between ‘free,’ ‘partly free,’ and ‘not free’ countries. The state of the Internet differs across the globe, and it is important to remember that laws and regulations shift and change constantly from region to region. At Golden Frog, we never compromise our dedication to developing secure and encrypted products, such as VyprVPN, to help provide access to a free and open Internet.

Learn about VyprVPN’s server locations in Dubai and the Middle East.

Learn more about Internet censorship in 2015.